I started maintaining marine tanks approximately 11 years ago. Since then it has evolved into a passion for keeping specifically reef tanks that has lasted for around 9 years so far! Recently I have begun my current tank, after moving to North Carolina. Since then, I have developed a strong preoccupation with keeping the highest quality corals and fish in the most beneficial environment I can, hence I begun operating Reefscience.

The display tank is 300 gallons [84″(L)x32″(W)x26″(H)] with the front and side panels made of starphire. Inter-American custom built the tank after my first tank (from a local shop) had the bottom pane explode after installation. What a mess! 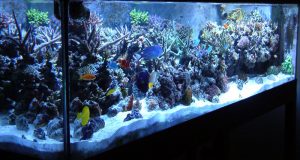 My equipment consists of a Euroreef 8-4 skimmer in a 70 gallon sump. A 120 gallon refugium is also a part of the system and is lit by a single 400W MH. Main lighting consists of 4 400W metal halides (2 20kK Osram radiums, 2 10kK Ushio) and 2 6’ URI VHO bulbs. The lighting cycle is 10 hours of VHO, 9 hours of radiums, and 8 hours of Ushios. Current and sump exchange are provided by 2 Ampmaster 2700 pumps. One serves as a return from the sump and T’s into the main system. The other T’s to 2 1” seaswirls located at opposite corners of the tank. To keep things cool, I have fans located above the sump, refugium, and main tank! I also run a MyReef calcium reactor (CR-2 Dual) to keep the sps growth high. 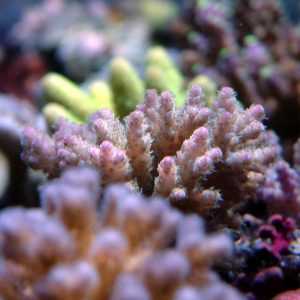 Filtration is by the 200 lbs of Fiji live rock and the skimmer. I also use approximately 2 pounds of activated carbon per week in the sump.

The 300g display tank has been in operation for 7 months. The 120 gallon tank was my previous display tank (now a refugium) and it has been at this location for one and a half years.

For maintenance, I change approximately 10 gallons per week of water. It seems to work well, doing small changes very regularly.

I feed flake food each evening followed by 2 cubes of PE brand mysis shrimp later in the evening. I also feed DT’s phytoplankton (approx 6 tablespoons) weekly along with a sheet of nori for the herbivores. The refugium does a great job of feeding the rest.

My tank consists of over 100 different species of SPS (both acquired from trading frags and wild colonies. I also have a variety of LPS corals, including blastamusas, brains, favites, and others. A couple of soft corals are present including ricordea yuma, various zooanthids and clove polyps as well. SPS definitely predominate the tank though. There are also a bright red rose E. quadricolor (bubble tip) anenome, 7 Clams (Maxima, Croceas, and Squamosa). 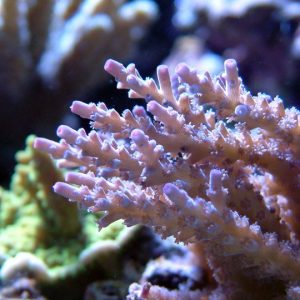 In the future, I plan on adding one more 400W or 2 250W DE HQI bulbs to help increase growth even more. 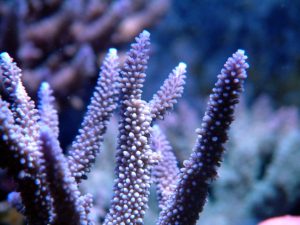 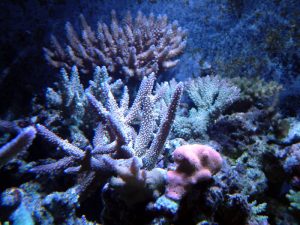 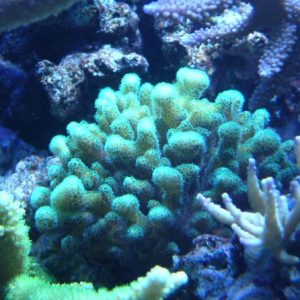 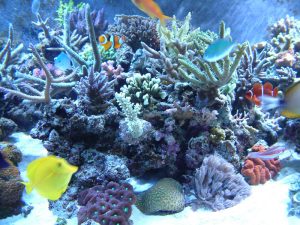 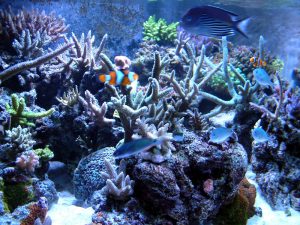 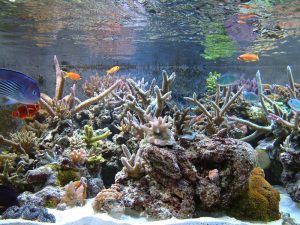 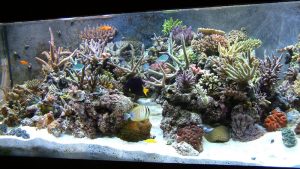 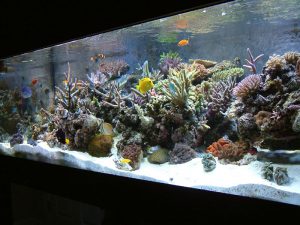 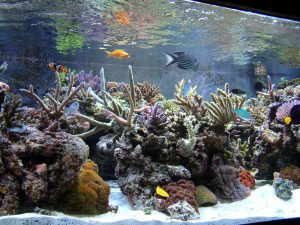 Short Take: The Information Gathered From The Ultimate Marine Aquarium By Michael Paletta